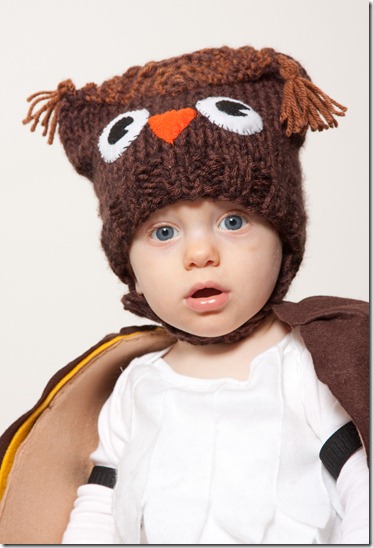 Isn’t he adorable?
The costume was adapted from Martha Stewart I did a lot my sewing on the wings. Basically sewing all the folds in place. The pattern called for a pilot’s cap. Apparently Martha thinks you can just pick up one at any baby store. I had a hard time even finding one online. So I made my own. So I grabbed my knitting needles and whipped this up in a couple of hours. 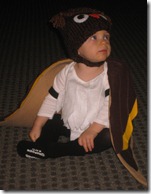 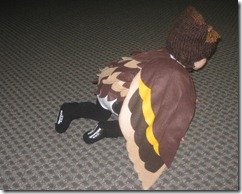 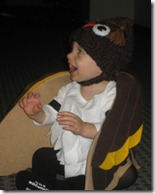 Make your own Baby Owl hat (for Personal use only) 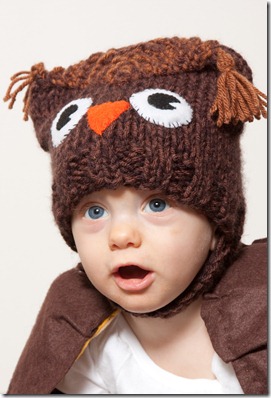 Holding the chocolate and espresso colors together cast on 38 stitches.
Row 1: *k2, p2* to the last 2 stitches, k2
Row 2: .*p2, k2* to the last 2 stitches, p2.
Repeat row 1 and 2 once more
Next row bind off 16 st then continue knitting in the 2x2 ribbing pattern as established. Place marker to mark the front of the hat. Using a backwards loop method to cast on 26 stitches. (48 st)
Join in the round and work 5 rounds in the 2x2 rib as established. Then knit 5 inches in Stockinette stitch.
Knit to Marker, Remove marker, Bind off the next 24 stitches.
Break the espresso colored yarn leaving a 6 inch tail to weave in. Add the toffee yarn and continue knitting with the chocolate yarn.
Next row: K1, k2tog, knit to last 3 st, k2tog, k1
Repeat previous row until 4 stitches remain. slip2, k2tog, pass both slipped stitches over the stitch. cut both strands leaving a long tail and pull through the stitch to bind off.

Fold triangular flap over and use the strands to fasten the flap to the front of the hat. Use one color for the left side and the other for the right. Make tassels with the toffee colored yarn attach to the corners of the hat. Here is a good explanation on how to make tassels.
Cut two white circles with diameters of 2 inches. Cut two black circles with a diameter of 1 inch. I cut a small triangle wedge out of the black circles to make it even cuter. Also cut an orange equilateral triangle with side length 1.5 inches. Use the orange thread to sew the triangle centered on the front of the hat about 1/2 inch above the ribbing. Sew the white circles on both sides of the triangle using the black thread. Then sew the black circle to the center of each white circle. Be sure to have the wedges face the same direction.
Sew the toggle button to the bottom of the hat next to where you casted on the additional stitches. The stitches should be loose enough that you can push the button through the strap so that it fits under your child’s chin.
This pattern is not for commercial use or monetary gain 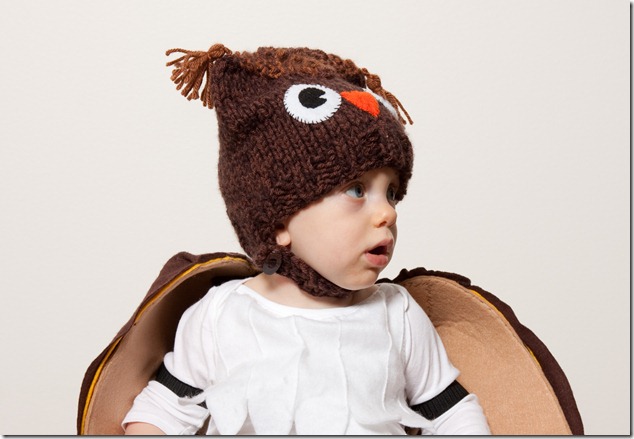